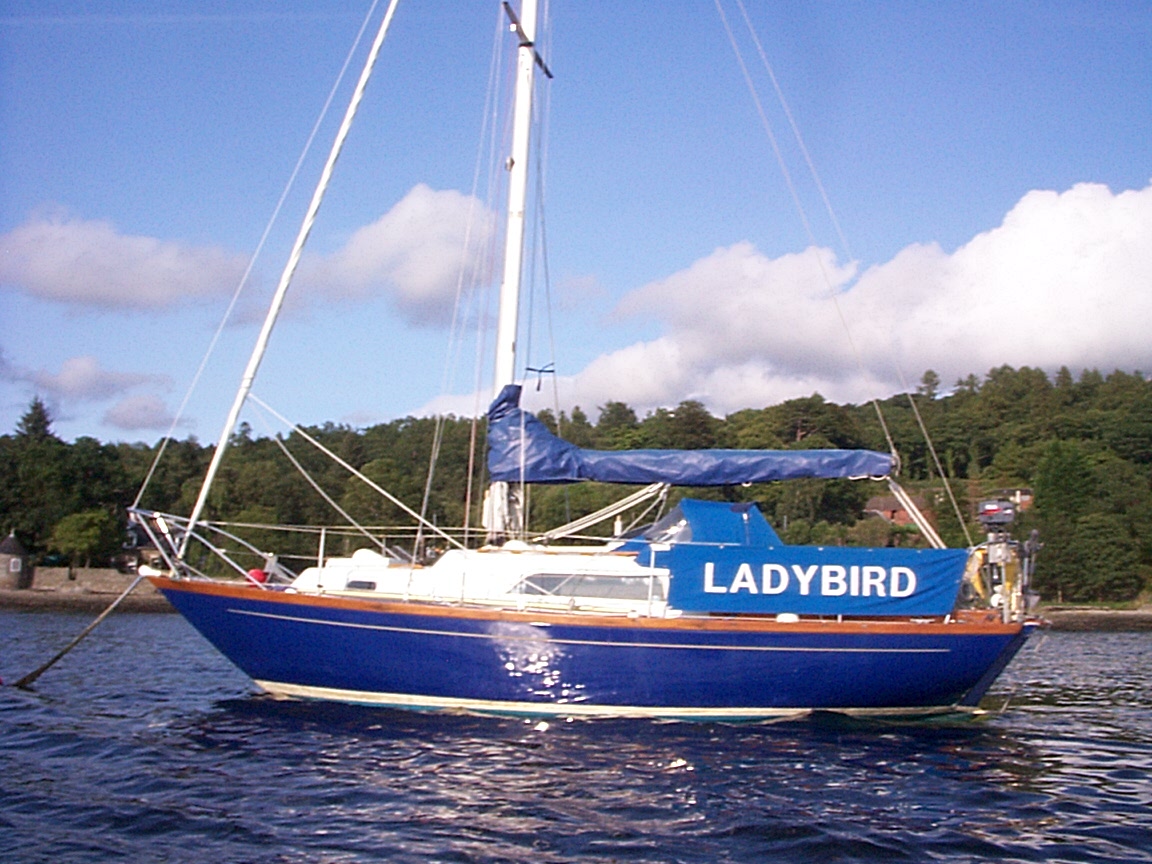 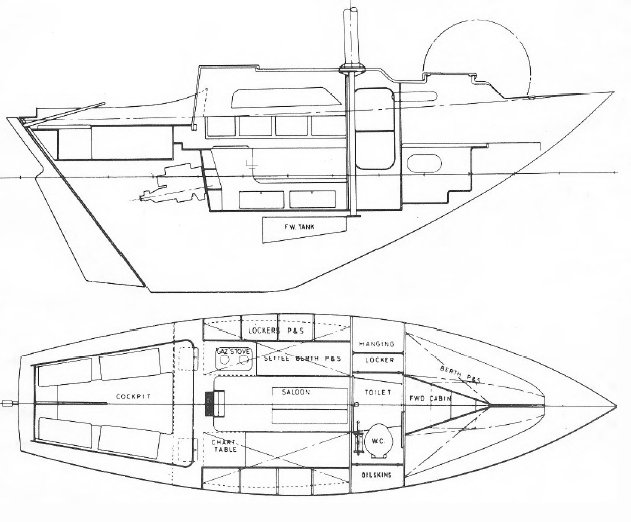 NOTE: The drawing shows the layout of the two cabin version of the Nic 26 which were, I believe, produced by the Burnes shipyard after Halmatic ceased production.

Regarded as being rather expensive when new, the Nicholson 26 had a short production run with only 64 being built between 1966 and 1971.

Hull construction is typical for her era with an encapsulated long keel (no keelbolts to worry about), cutaway forefoot and transom hung rudder. Shroud attachments pass through the deck and are bolted through substantial fibreglass webs moulded into the hull. Windows are Triplex glass in aluminium frames.

Being heavy by modern standards the Nic 26 carries her way well and has enough momentum to punch her way through seas that would be hard going for lighter craft. Her motion always puts me in mind of far larger boats and with her underwater profile she never slams, she simply slices through the waves.

Cockpit
There is ample room for three or four adults to sit “on the high side” with feet braced against the opposite seat. There is good access to the self-tailing sheet winches via zipped panels in the sprayhood. 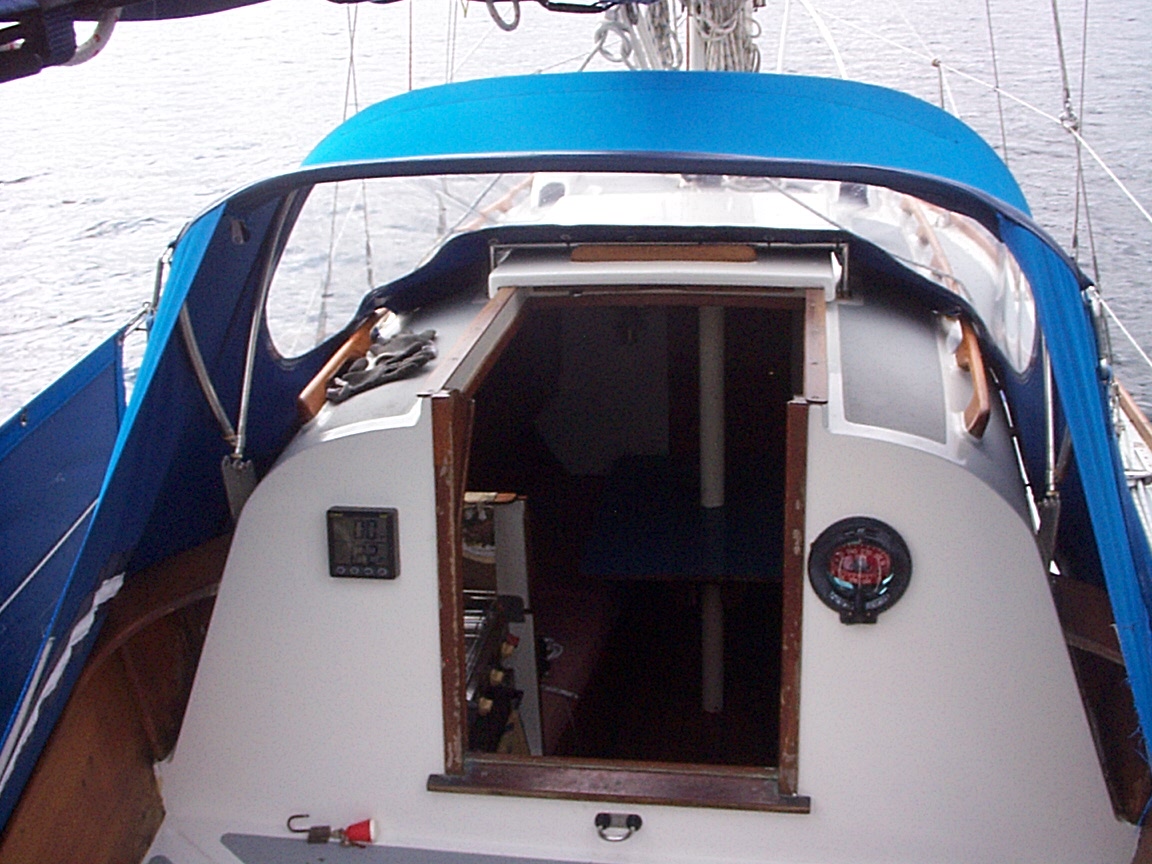 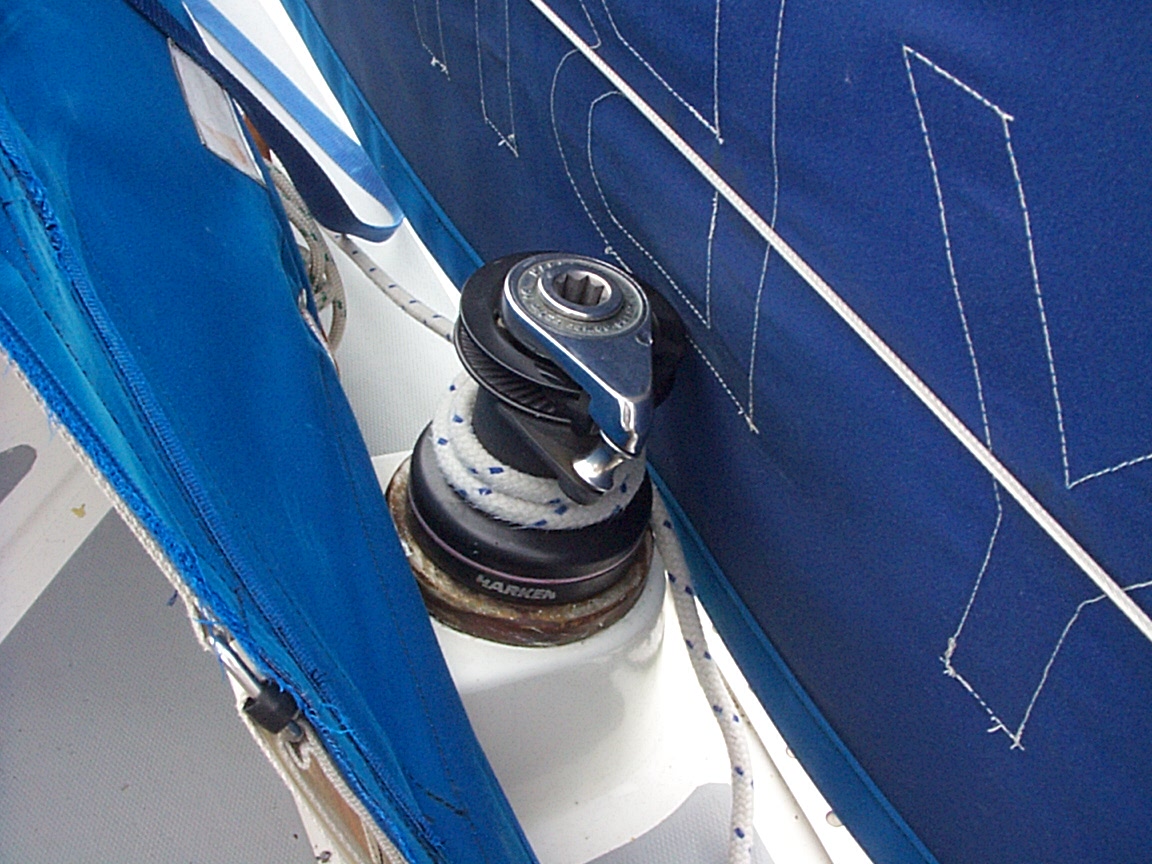 The mainsheet runs on a Barton track on the aft end of the cockpit. The Nic 26 has a relatively narrow transom so sliding the mainsheet down the track doesn’t help much in gusts. Where it scores however is ‘fine tuning’ sail balance for the windvane self-steering system. The self-steering comprises a windvane connected to a trim-tab on the aft end of the rudder. When Ladybird goes off course the wind vane is deflected, which moves the trim-tab, which in turn moves the rudder and brings Ladybird back on track. Of course, all this is relative to the wind, which makes for some very interesting tracks when there are a lot of hills and mountains around to mess with the wind. Where it scores is that the system consumes zero battery power, and once the sails are set you don’t have to keep fiddling with the sheets as they are always perfectly set. 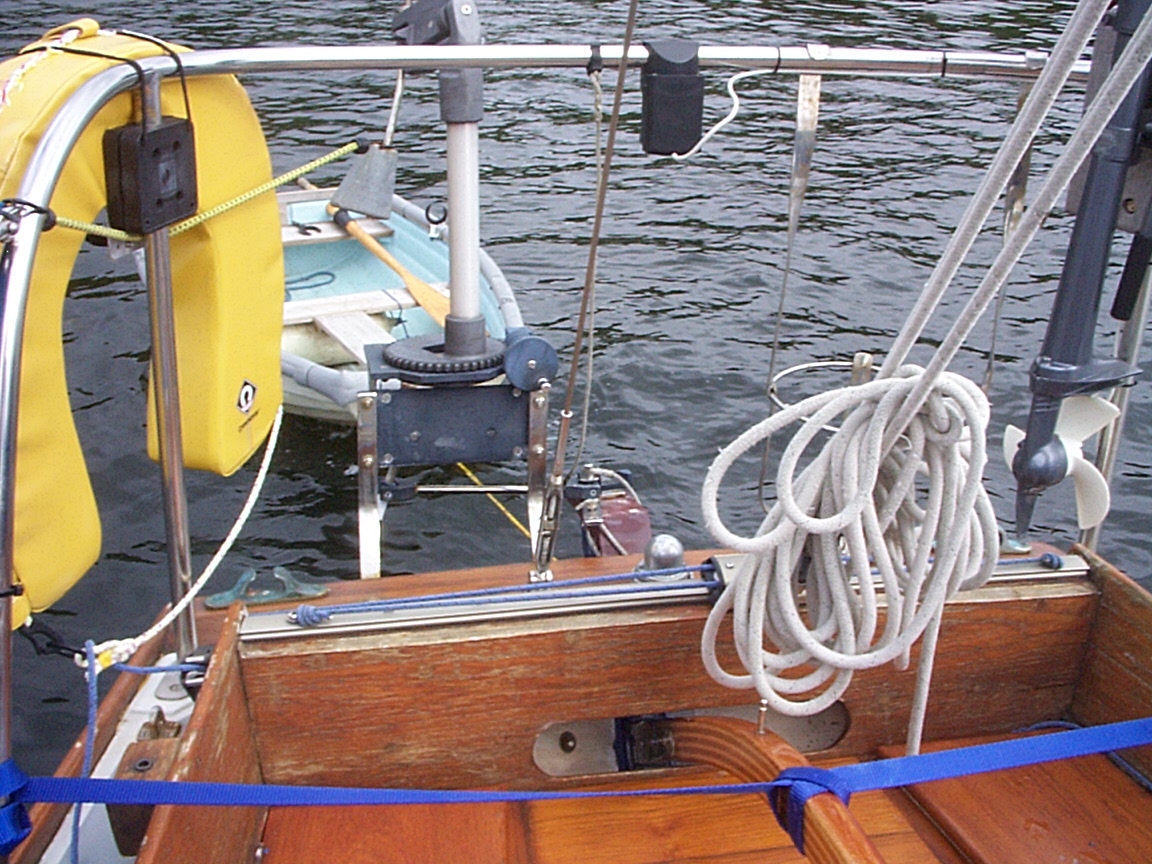 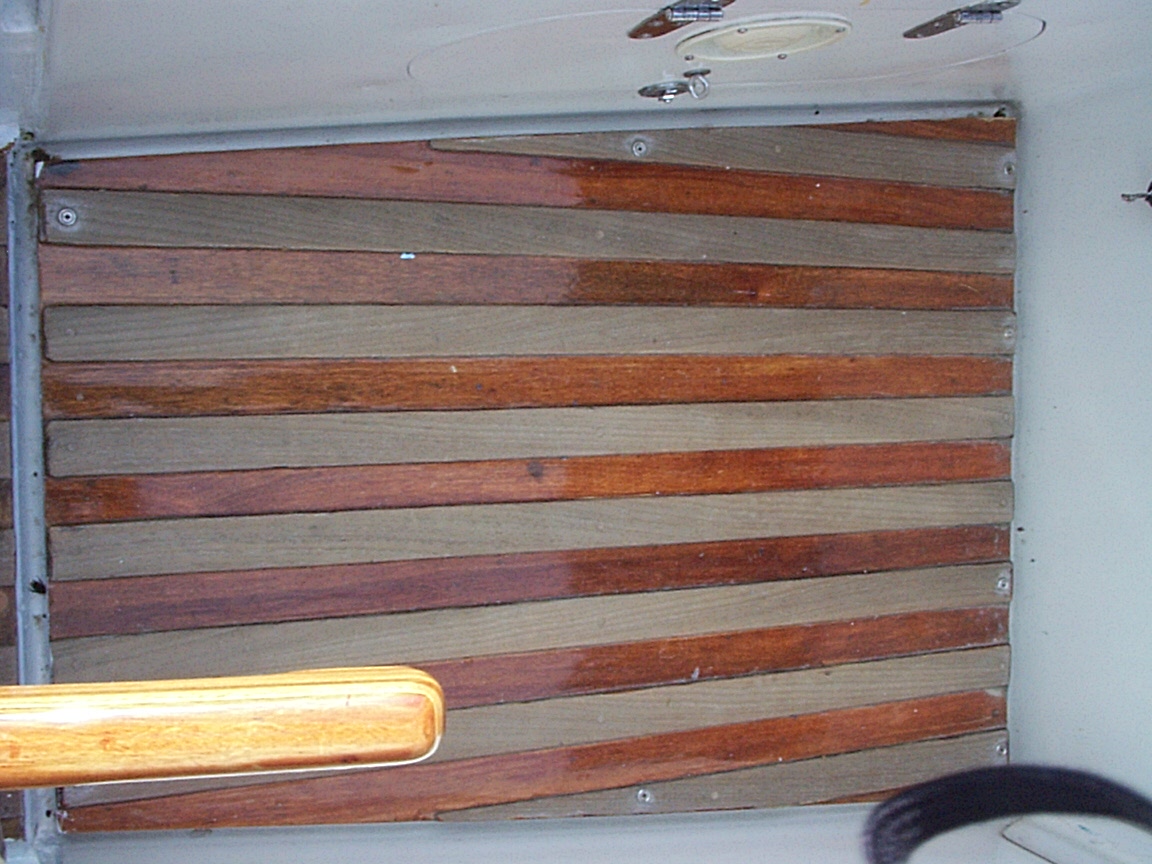 Three lockers at the aft end of the cockpit contain 10 litres diesel for the Eberspacher, the engine waterlock / silencer, anchor pennant and buoy, a 4.5kg Camping Gaz bottle, Manual Bilge Pump and stern greaser, plus stowage for the Bruce kedge anchor, motoring cone and anchor ball. The port quarterberth was sacrificed many years ago to create a commodious locker under the port cockpit seat for fenders and mooring warps. The cockpit sole was replaced with 12mm marine ply with teak slats to give good grip. 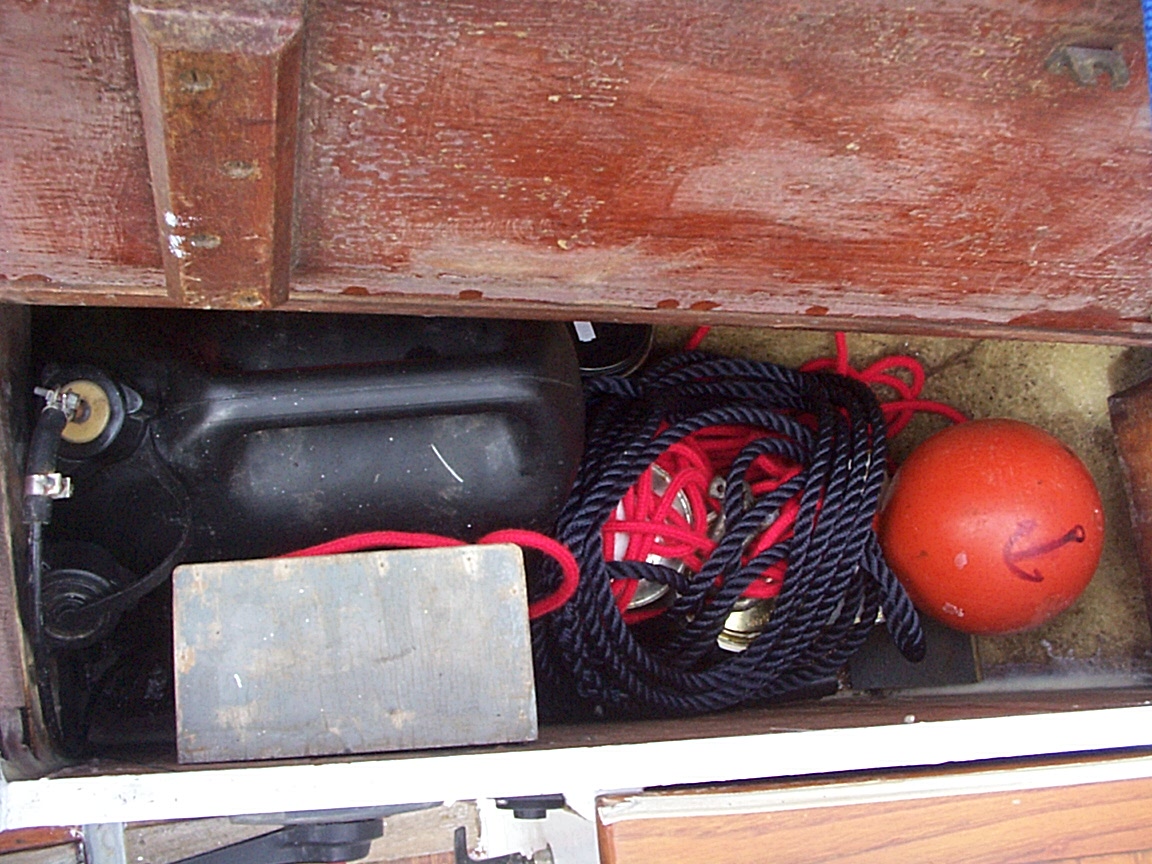 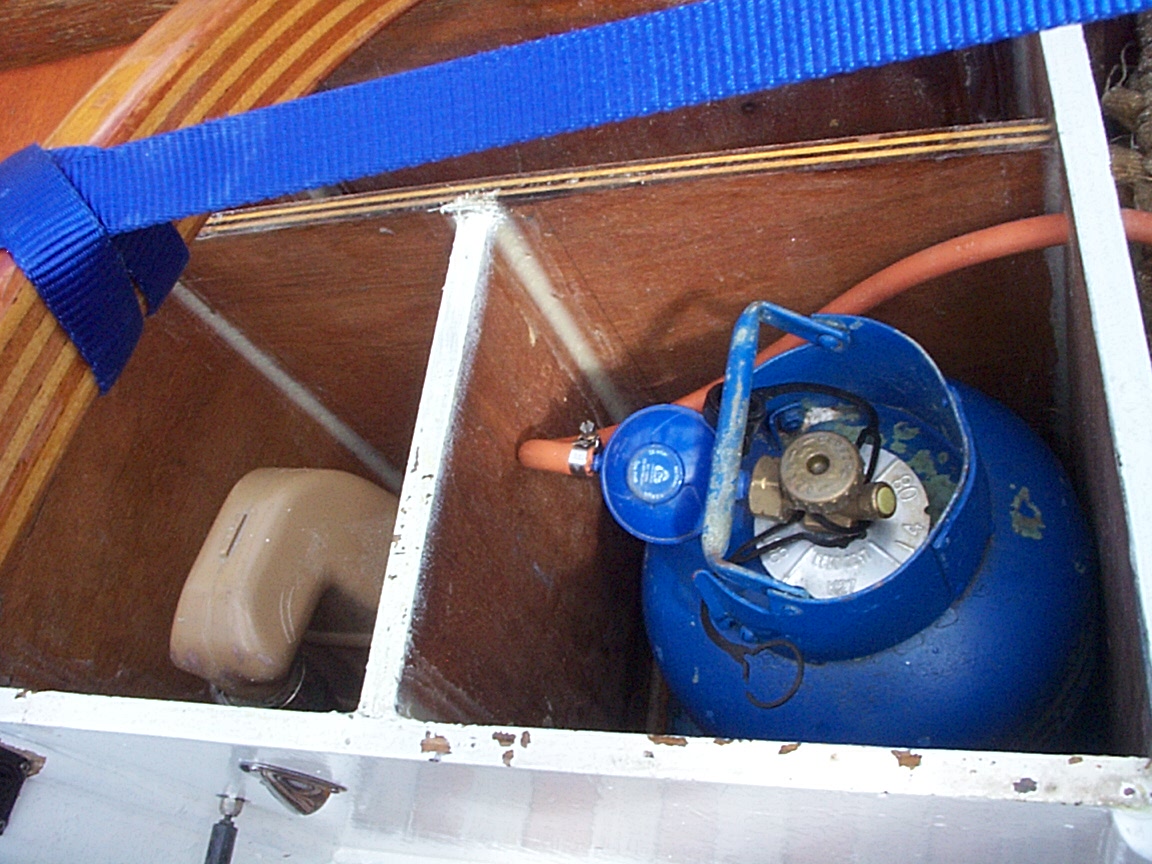 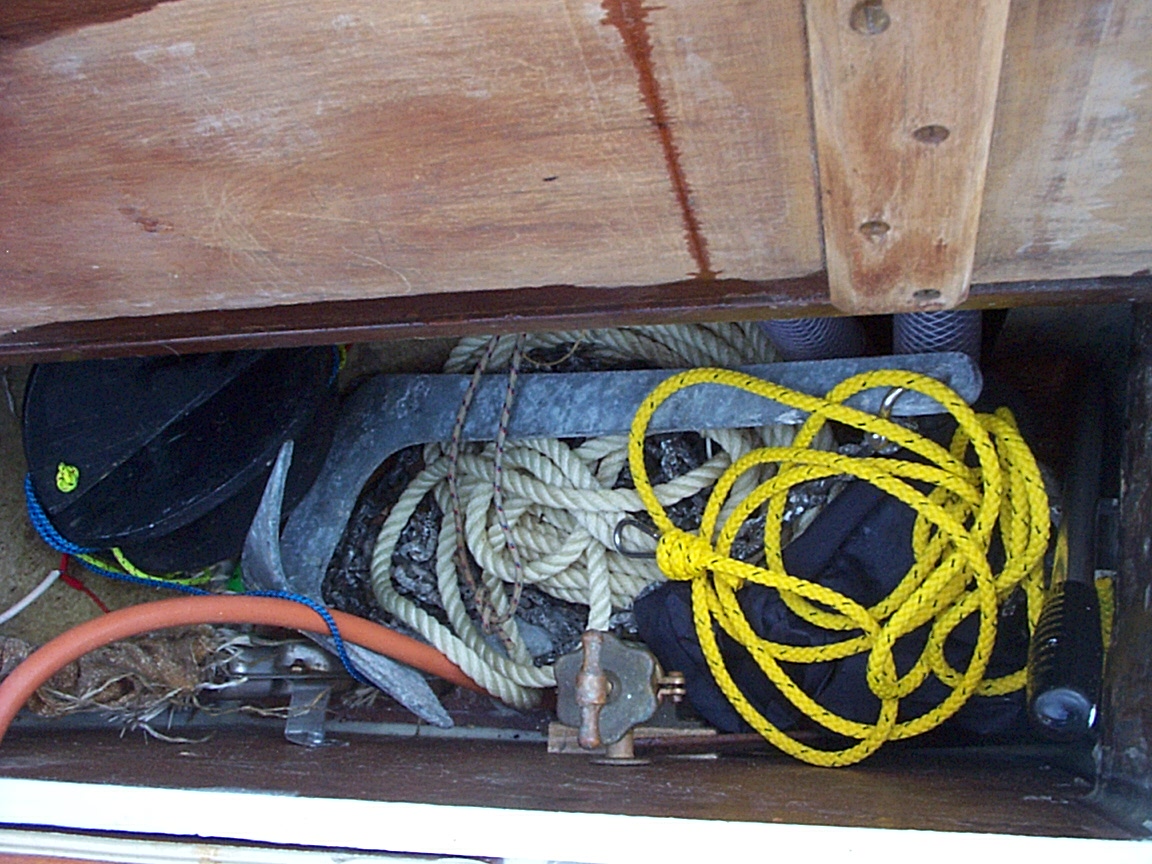 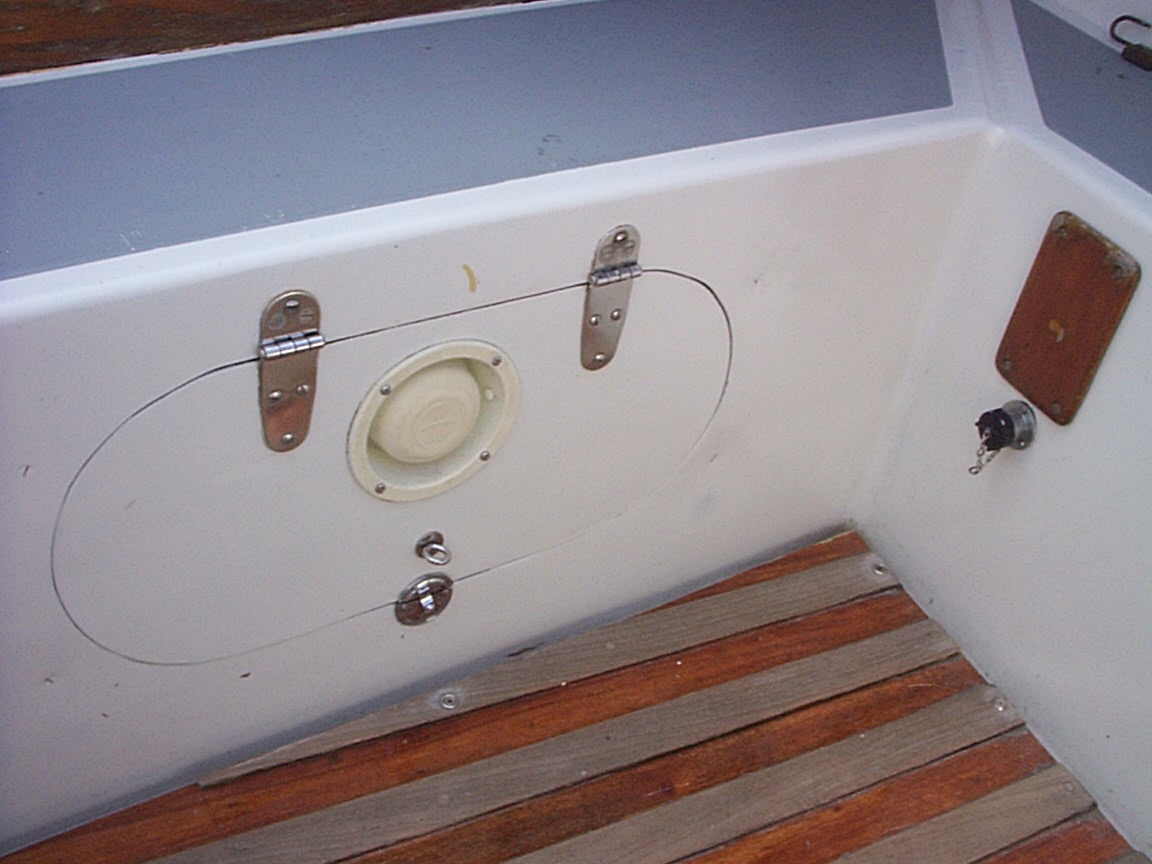 On Deck
The foredeck is small, as you would expect on a 26-footer. The pulpit, however, gives a good sense of security whether you are picking up a mooring, dropping or recovering the anchor. Two bronze fairleads, a cast stemhead fitting and a substantial cleat make up the mooring arrangements. There are similar cleats on the port and starboard quarters plus midships spring cleats. 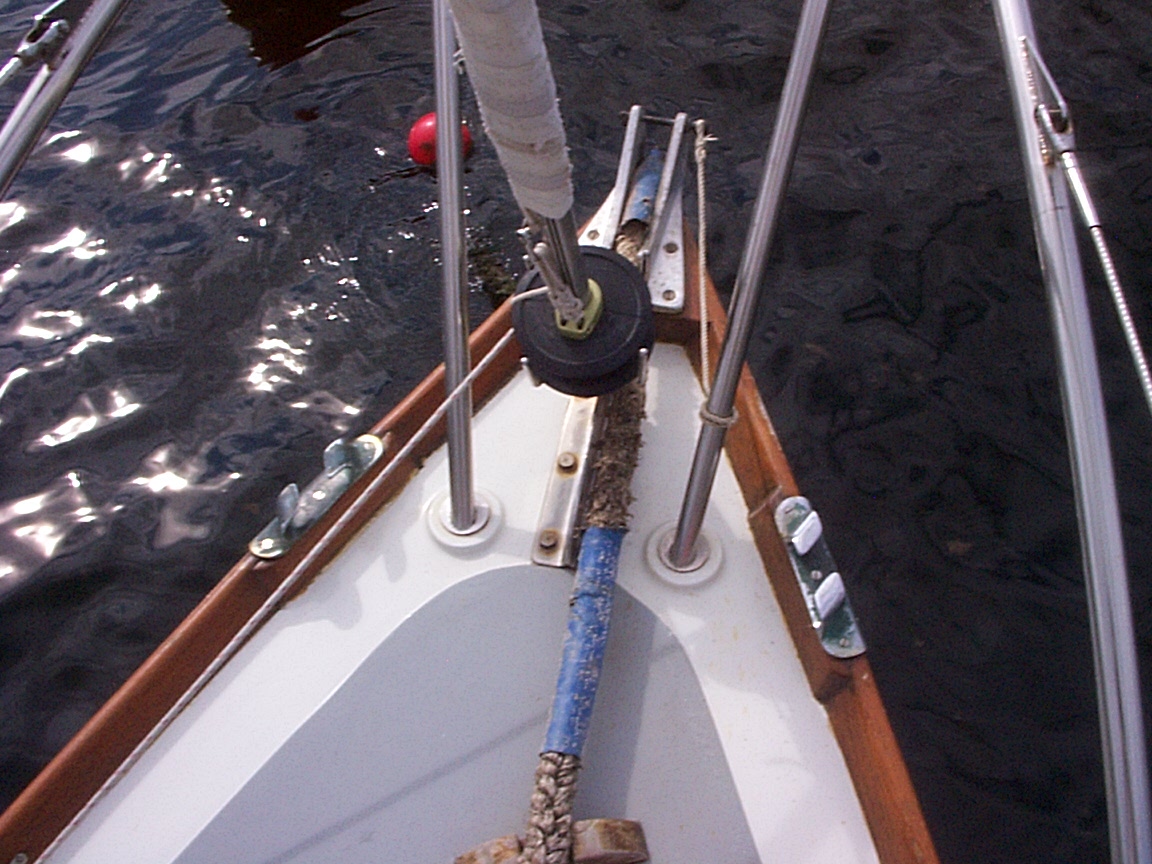 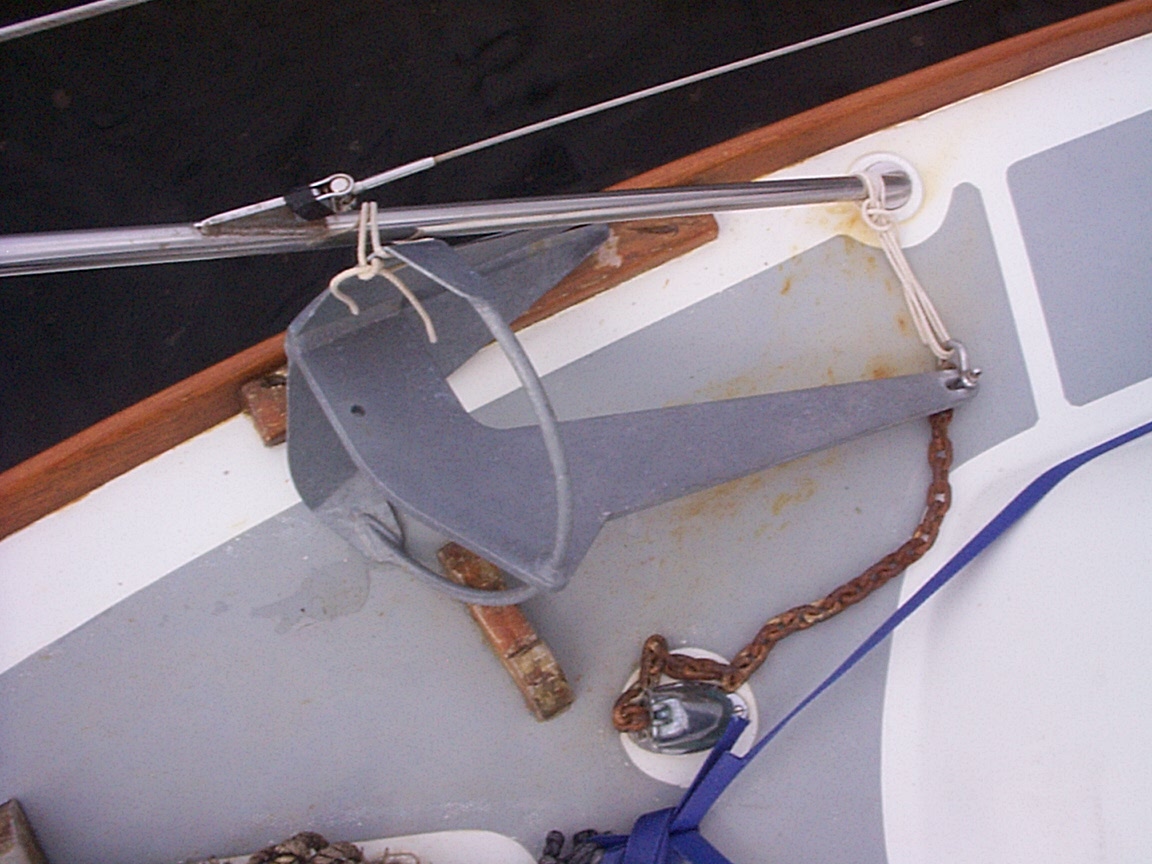 Ladybird was professionally painted in 2015 using International 2-part polyurethane. The deck and coachroof were finished in off-white, with a matting agent added to reduce glare. The moulded non-slip pattern on the deck areas were painted with a 2-part non-slip paint in grey.
The dorade style vents, unique to Nicholsons, one on the forehatch, one each side of the coachroof, plus the ability to leave the main hatch ajar yet securely locked, ensure good ventilation which keeps the boat sweet and dry. All the brightwork is finished with several coats of International Woodskin. 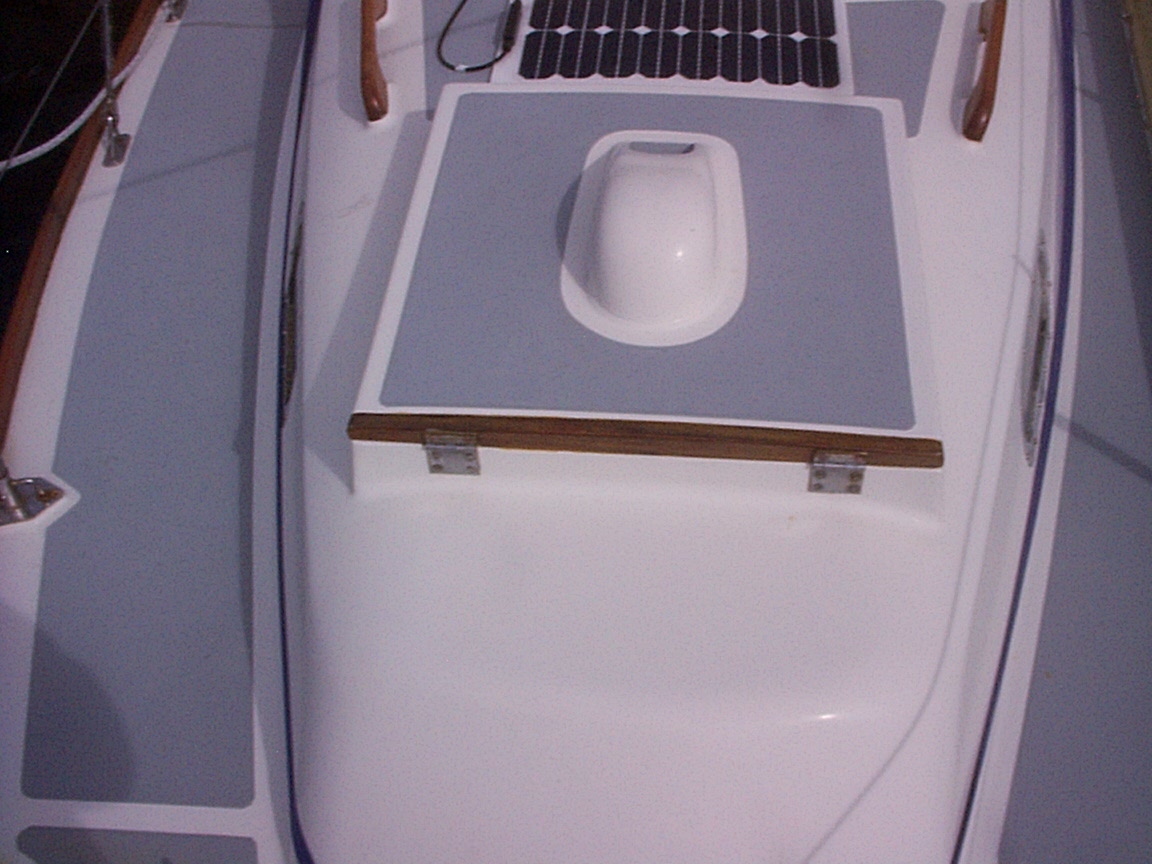 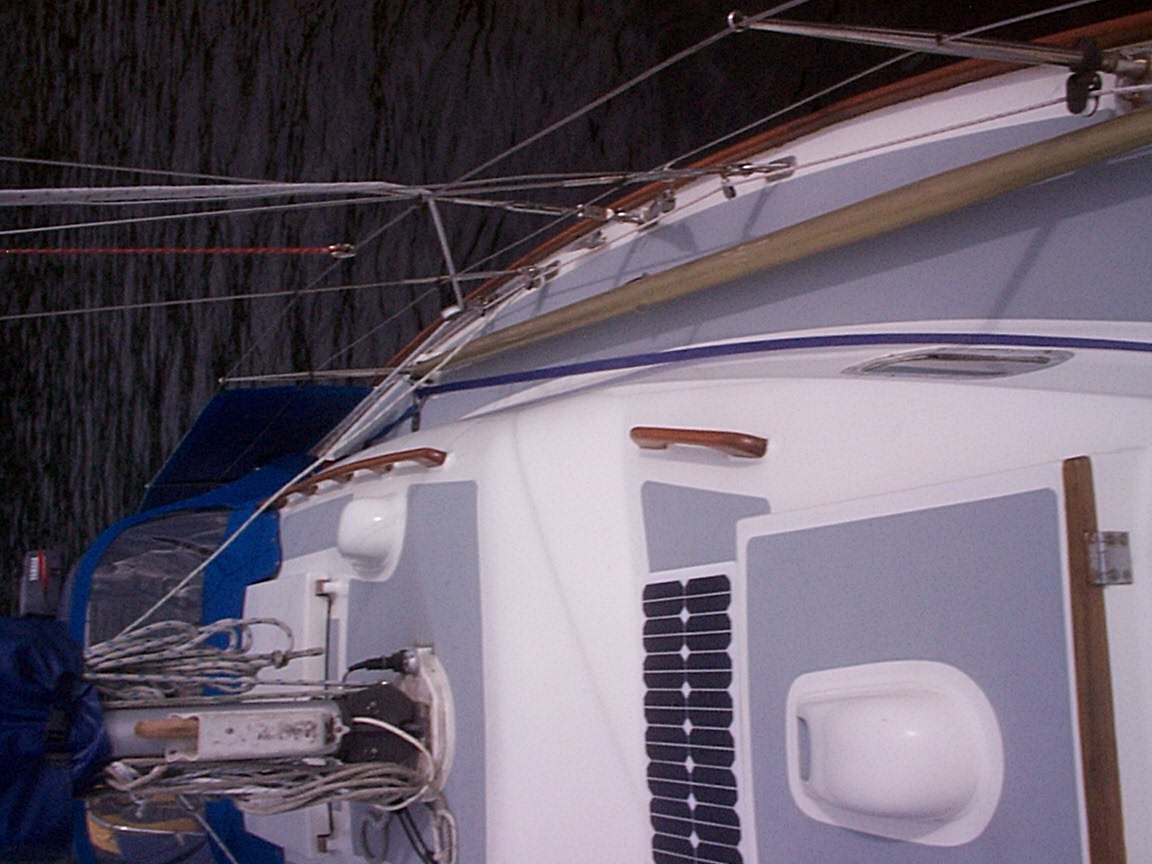 Engine
Yanmar 1GM10 driving a two bladed prop giving a cruising speed of 4.5 knots rising to around 5.5 knots flat out in calm seas and with a clean bottom and prop.
I have carried out all the maintenance myself, including replacing the hard to get at pencil anode. The engine has done just over 1,000 hours, starts easily, burns no oil and doesn't smoke.
The stern-tube has inboard and outboard white metal bearings with remote greaser and a conventional stuffing box. There is a flexible shaft coupling at the gearbox end. Rigging
The Nic 26 has a simple single-spreader masthead rig with twin lowers, cap shrouds and a single backstay. The standing rigging was all replaced in 2020.
A removable inner forestay was installed in 1997 for a hank-on storm jib, but without any means of hoisting one. I fitted a mast sheave and dyneema halyard in 2010.

Instruments
Standard Horizon GX2100E DSC VHF.
NASA Clipper Duet in cockpit. NOTE: The speed is from the pulse output of a GPS receiver, so gives Speed Over the Ground (SOG) not Speed Through the Water (STW).
NASA Target Speed and Distance Log at chart table. This one gives you STW. 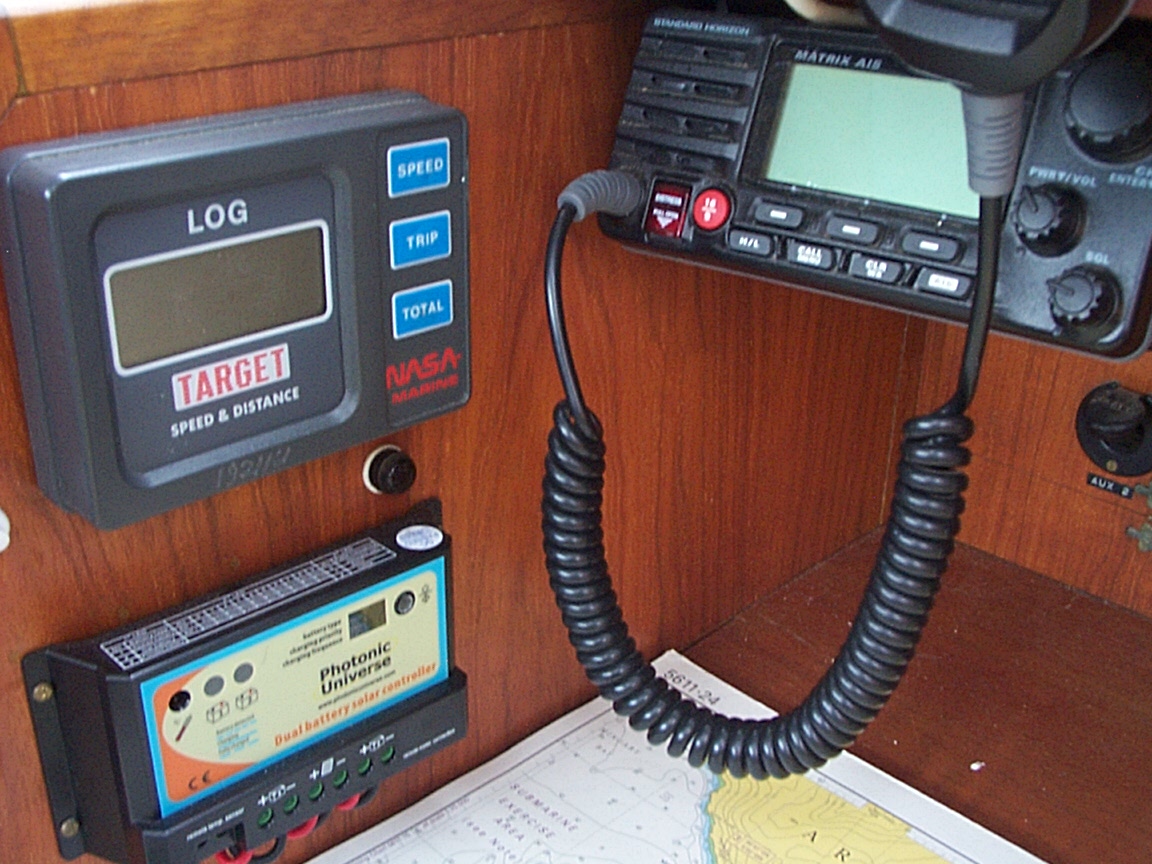 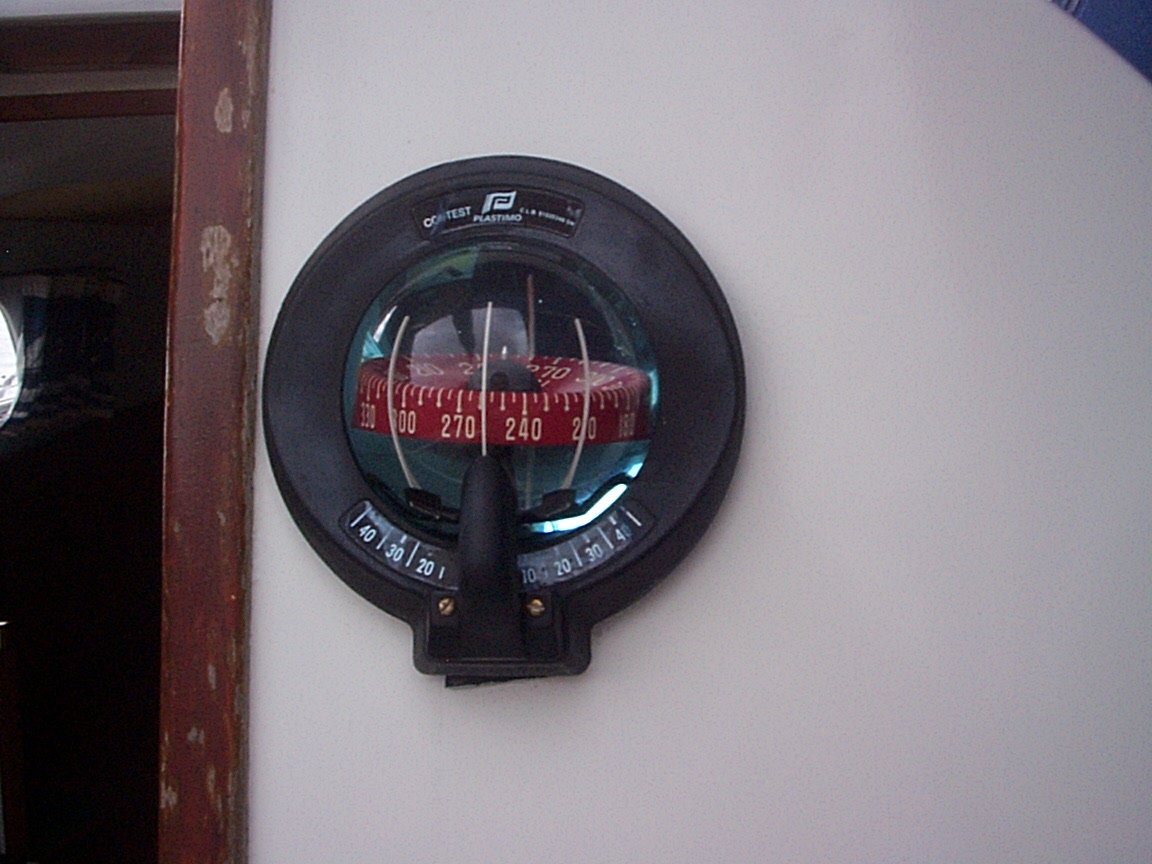 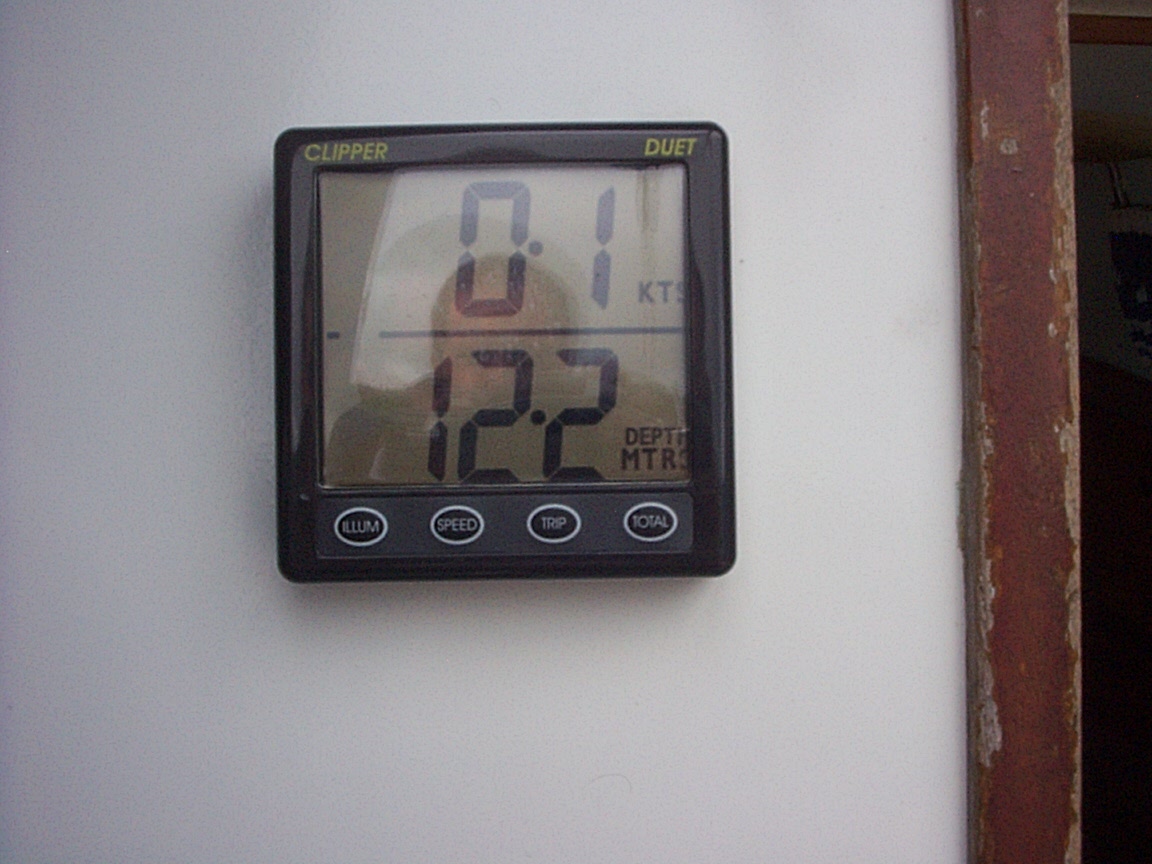 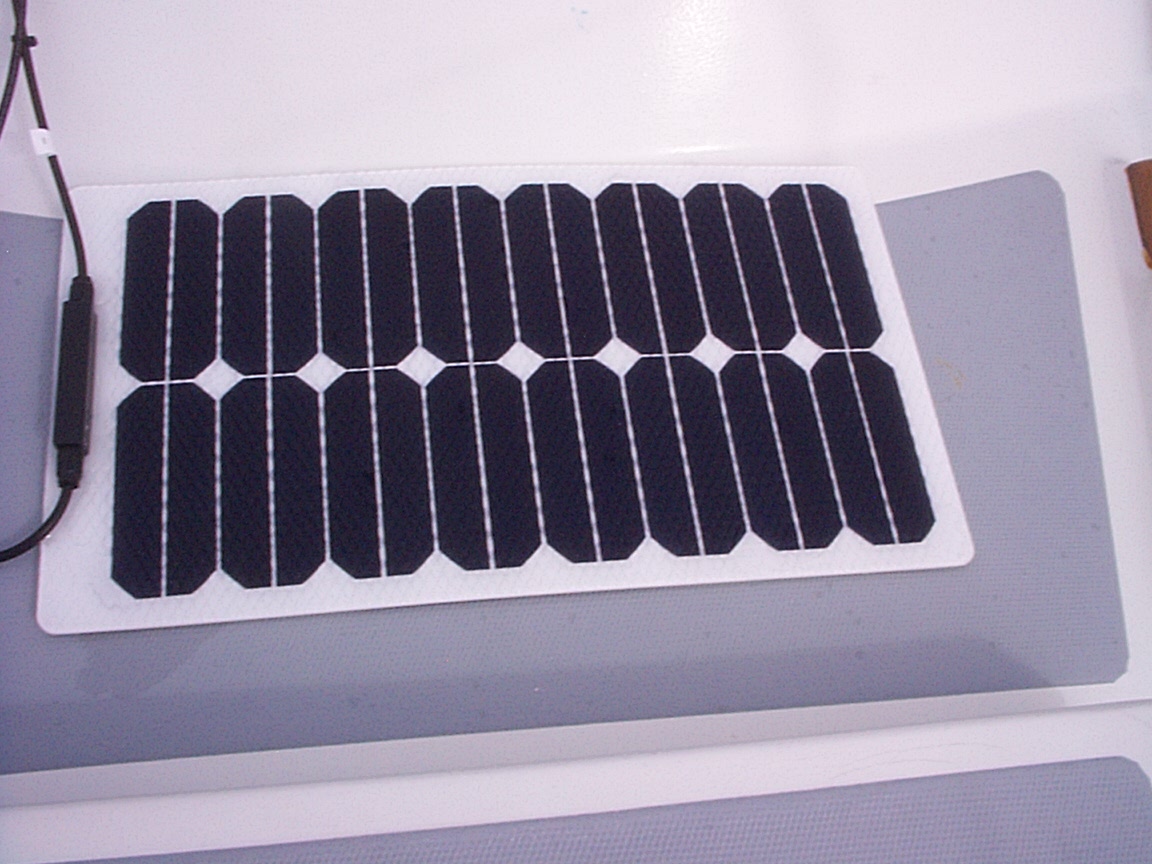 Accommodation
Down below there is over 6’ headroom the full length of the saloon. Surprisingly roomy, the saloon would shame many a 30 or 32 foot sailing yacht. On descending the companionway, the galley is to port with a stainless-steel sink provided with fresh and seawater taps. There is stowage for cutlery, crockery, etc. behind the sink and a mug rack. 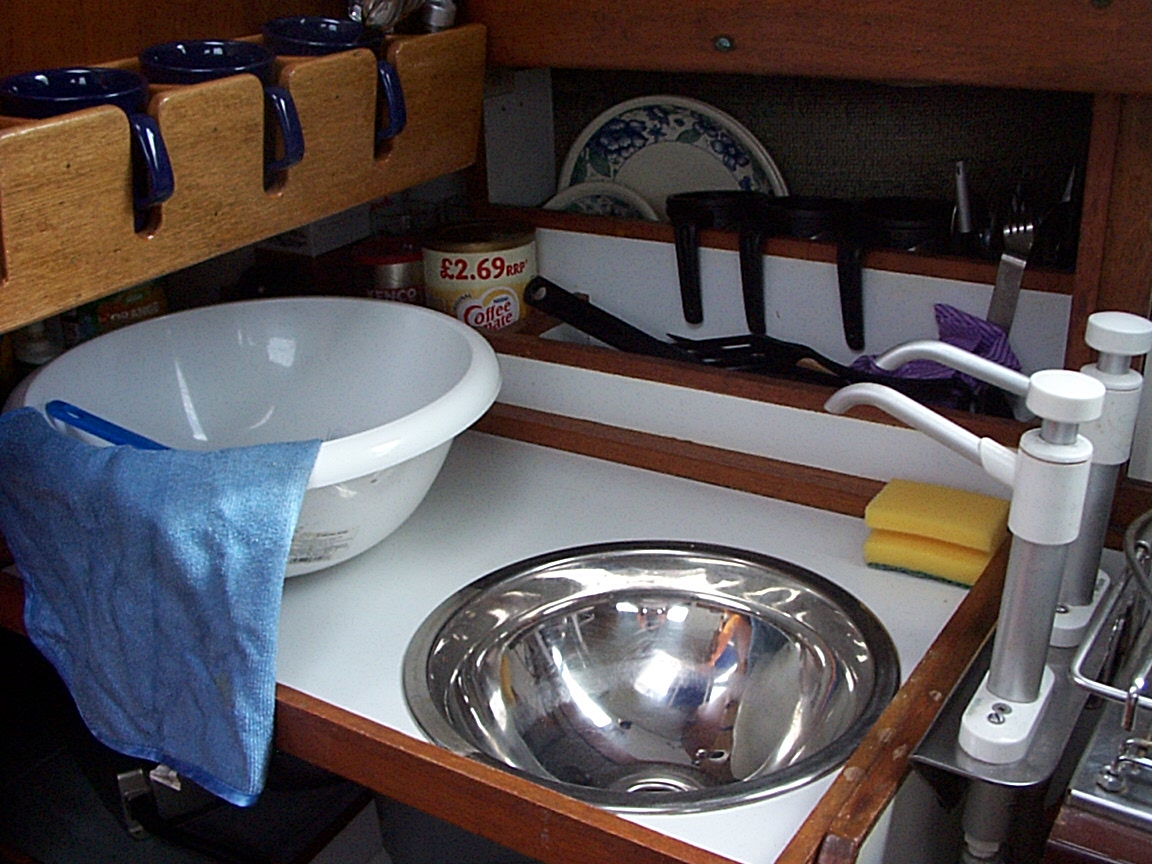 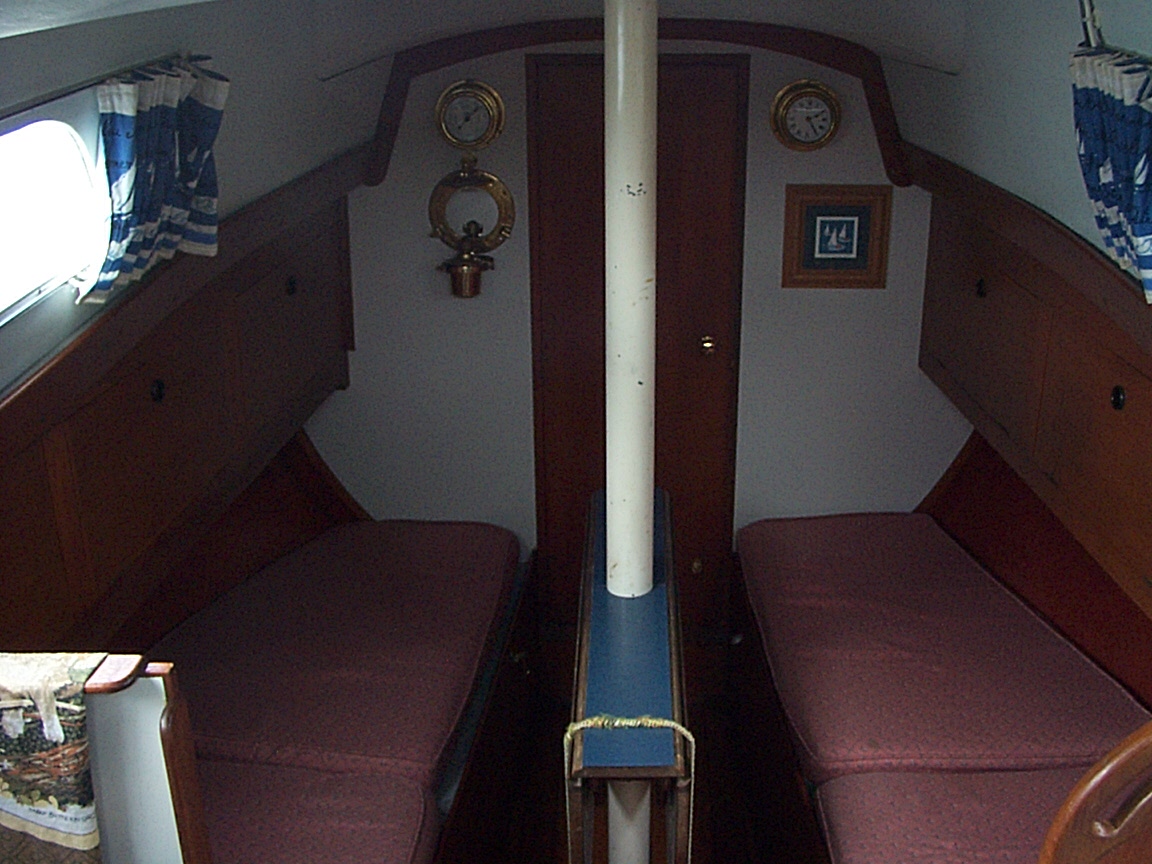 The gimballed Plastimo Atlantic cooker, although old, is perfectly serviceable. There is flame-failure shut-off on the oven and a gas isolation valve to the left hand side of the cooker. To right of the cooker a fold-down flap provides extra work surface for the cook. Behind the cooker there is a locker for pots and pans with another good size locker below. The Eberspacher vent is just visible at the base of the engine box. 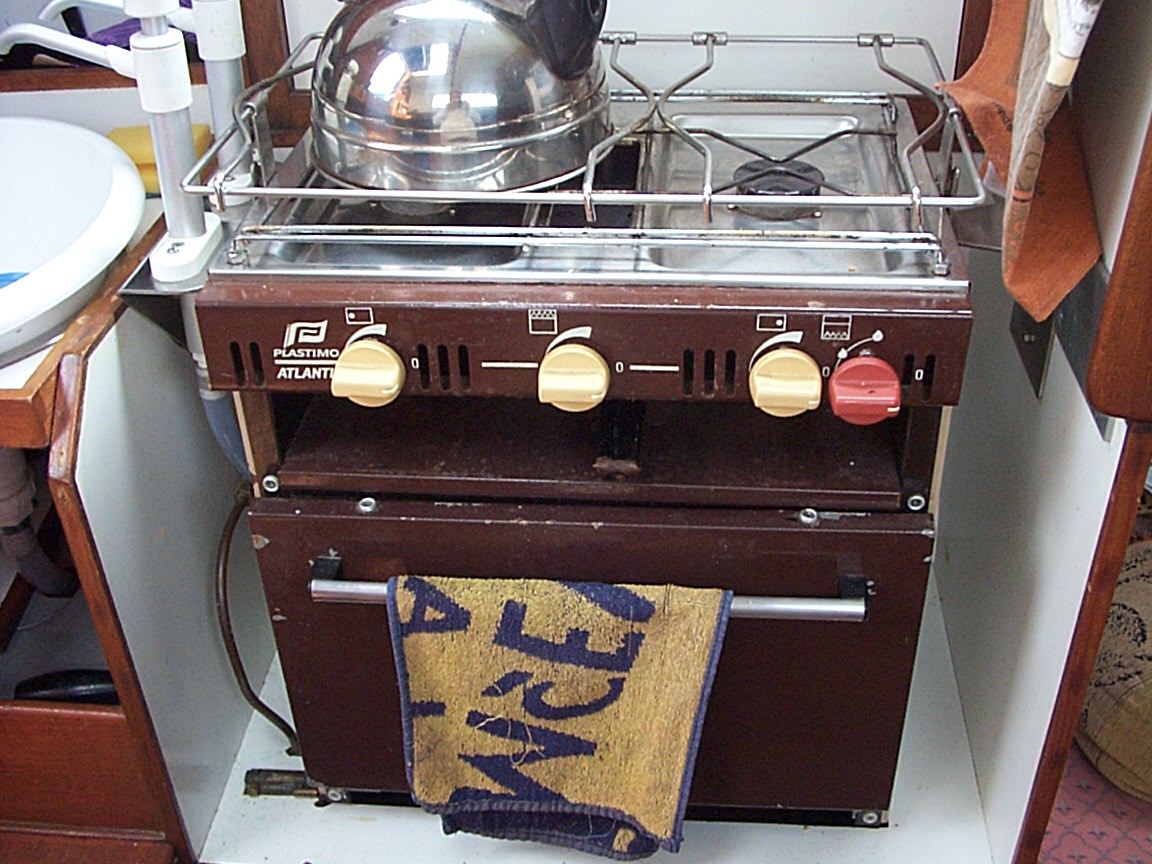 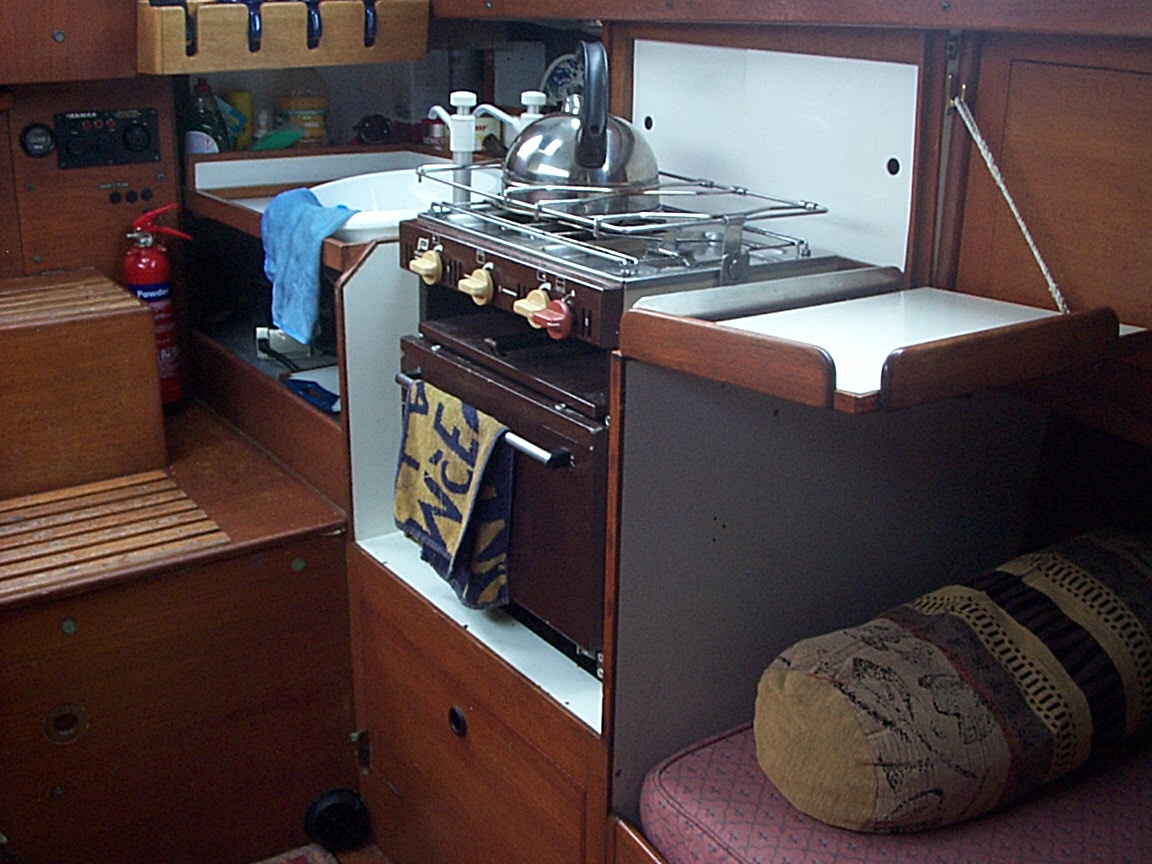 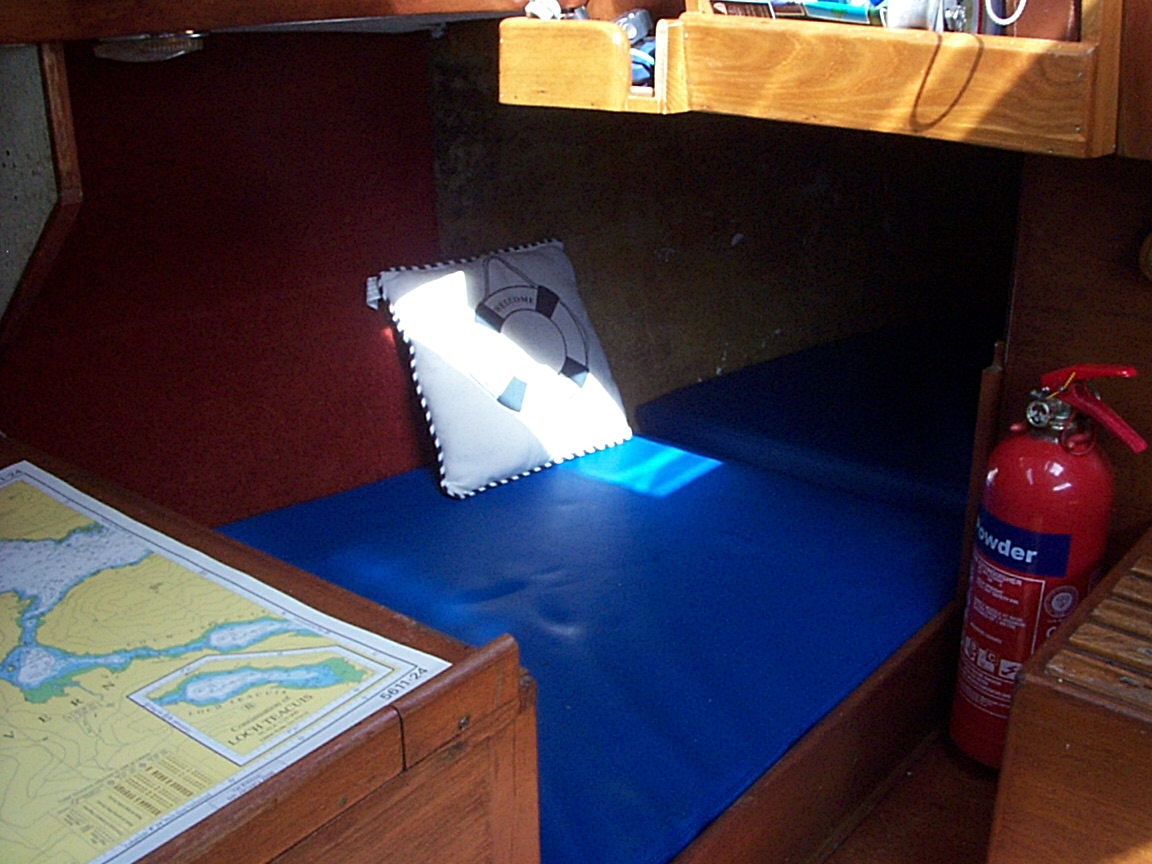 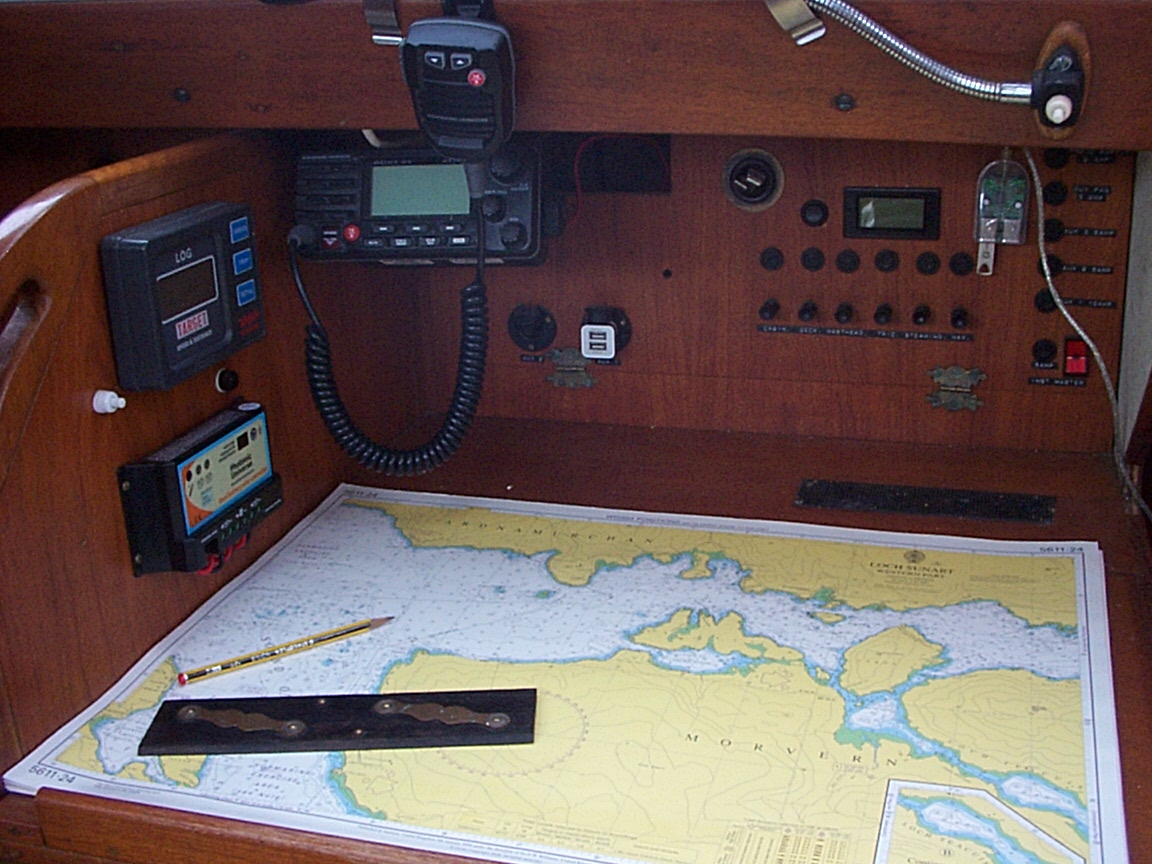 Forward of the galley and chart table we have full length bunks (6’ 4”) to port and starboard. Between them lies a drop-leaf table covered in quaint 1960’s blue Formica. The mast compression post passes through the table. Lockers above the bunks and below provide enough stowage for extended cruising. The fit and finish of all internal woodwork is still extremely good. 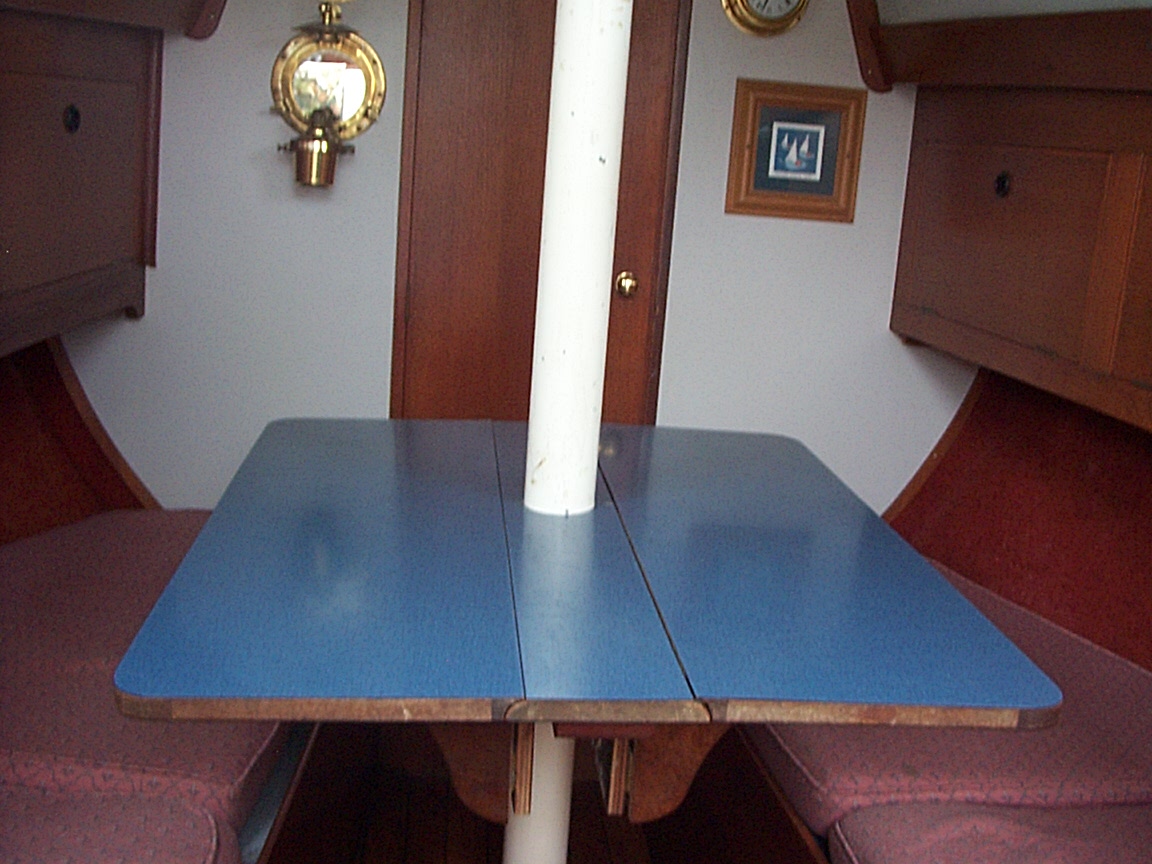 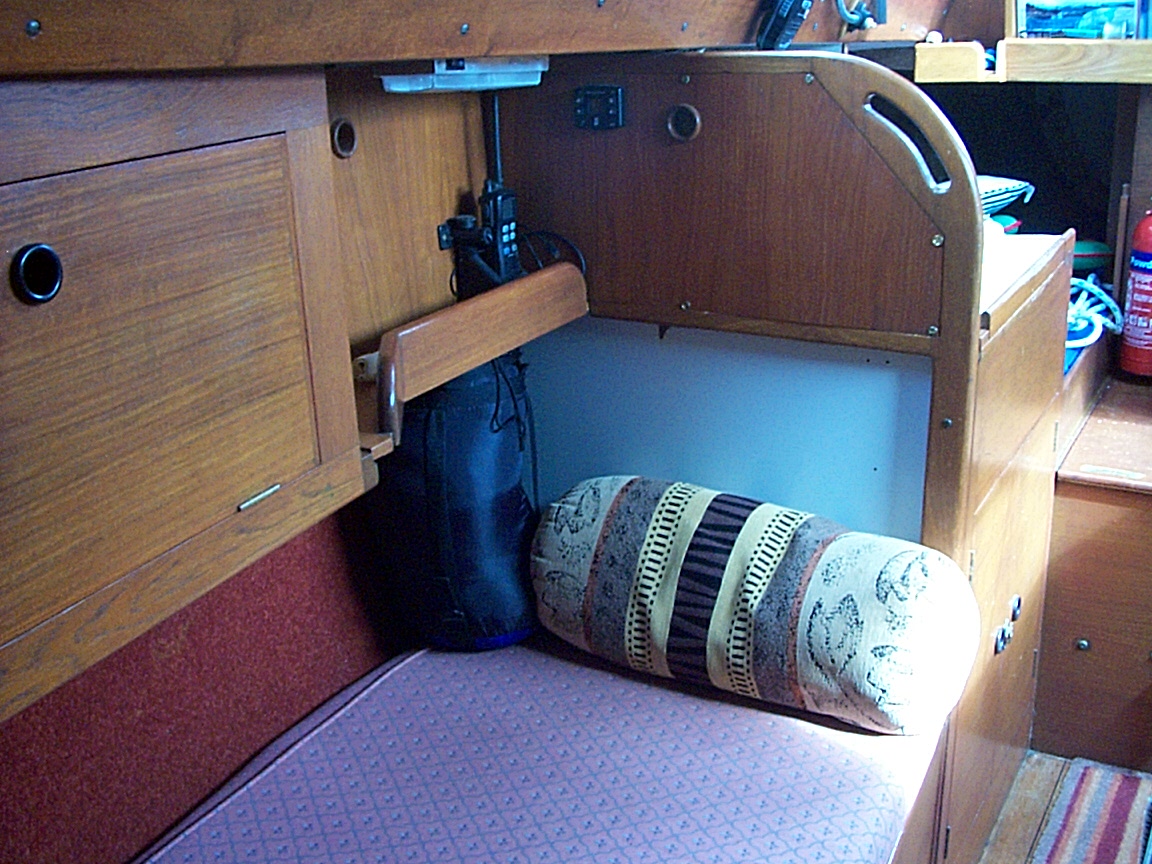 The door in the forward bulkhead leads to the heads where you will find a Jabsco toilet, a sink (with cupboard under) supplied with fresh water, a vanity mirror, a hanging locker for wet oilies, the chain locker, and a reasonable amount of stowage for hold-alls, sails, large fenders, bucket, boathook and brush. 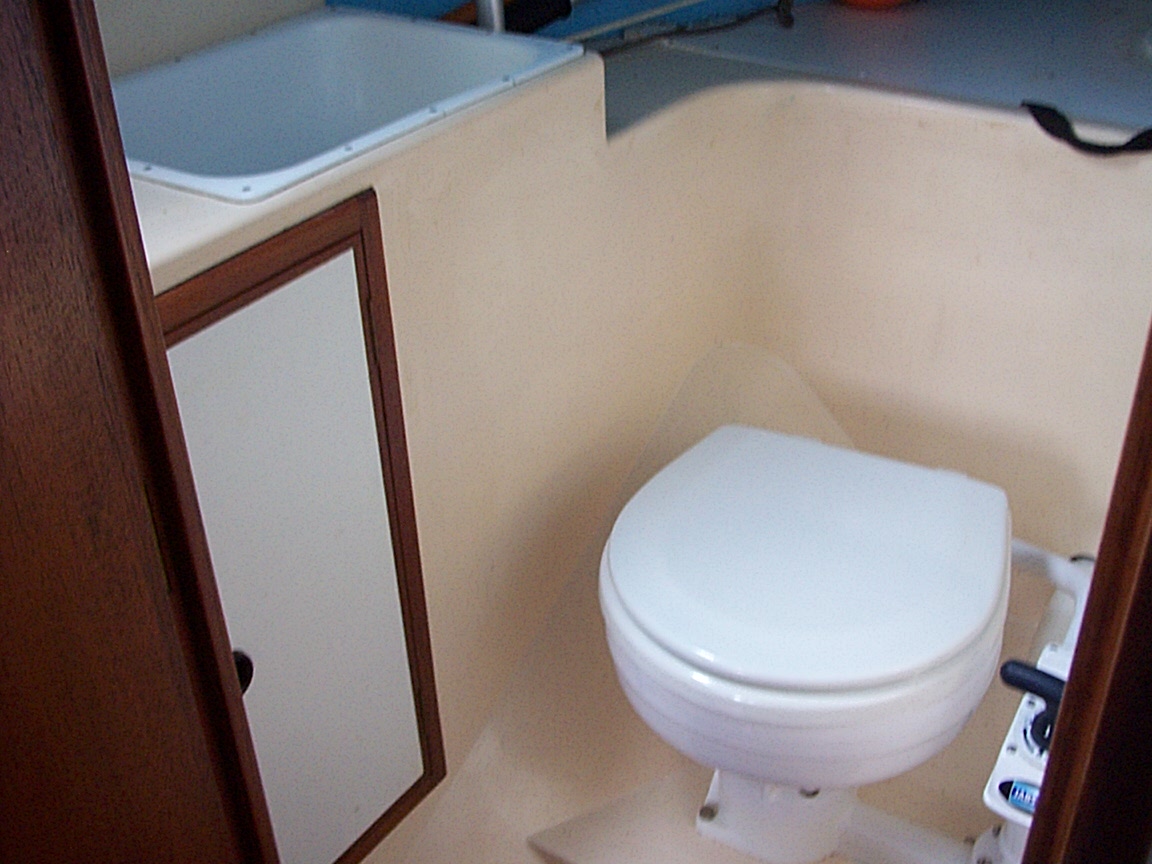 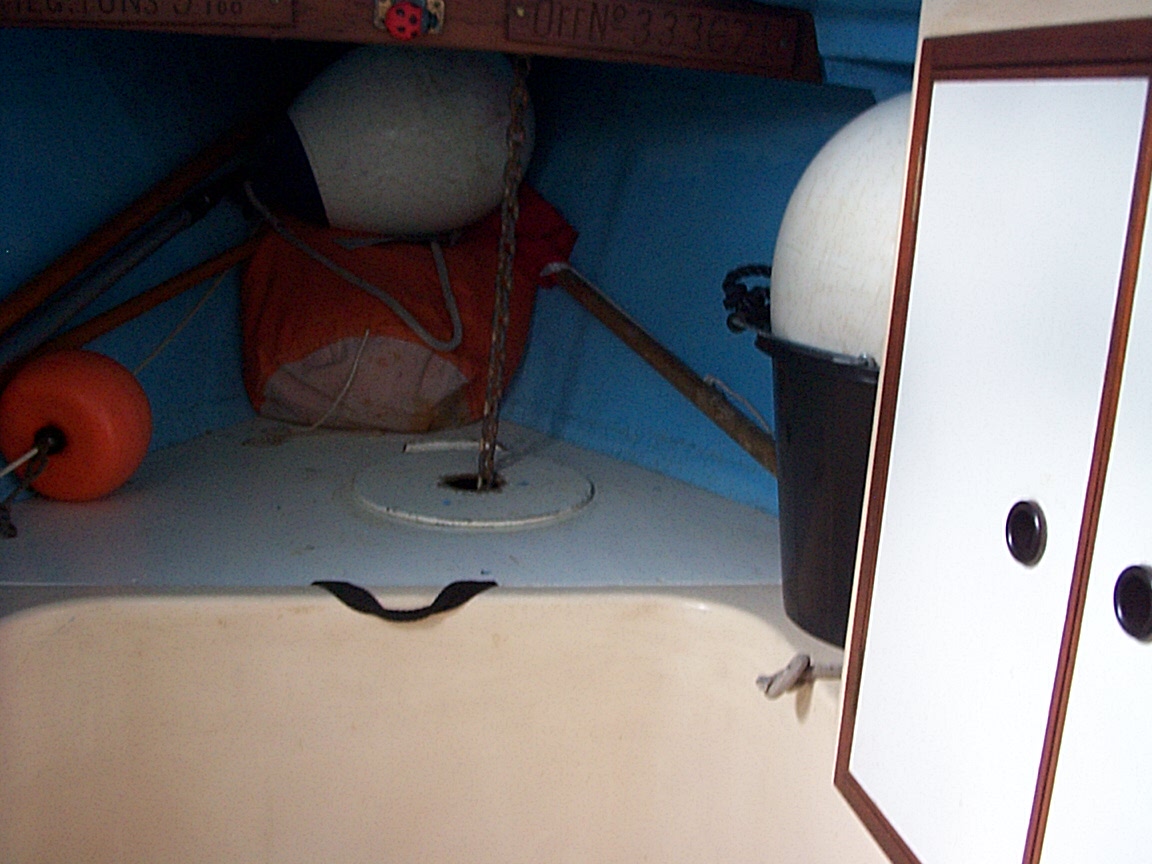